Today we have award-winning author Kevin Miller sharing his insight about the making of a story, which includes asking an important question. Let’s see what he says:

Want to Write a Great Story? Ask a Great Question

One of the most common mistakes that aspiring (and even experienced) fiction writers make is thinking they have to start out knowing all the answers. This way of thinking leads to only one place: writer’s block, a.k.a. perfectionism.

Instead of answers, all great writers start out with a series of questions. Not only does starting out without all the information make writing an exciting process of discovery, in theory, it should also make reading the finished work thrilling and surprising because there’s no way for the author to unconsciously telegraph what happens next.

So, give yourself a break, and stop thinking you need to have everything figured out before your fingers hit the keyboard. You should have some answers (Stephen King recommends having about 60% of your story figured out beforehand), but it’s far more important for you to have a number of things you’re curious about.

Among those queries, one question reigns supreme, and it starts with two simple words: “What if?”

These two words have a magical quality in that they can take any ordinary thing and make it extraordinary. In the movie business, we call this a “high concept.”

For example, consider a simple wardrobe. What if on certain occasions this particular wardrobe functions as a portal to another world? Ask that question, and you wind up with The Chronicles of Narnia.

How about this one: children’s toys. What if they have a secret life when humans aren’t around? Ask that question, and you get the Toy Story franchise.

Or how about this: monsters under the bed. What if monsters aren’t evil, and they’re only scaring us because they need the energy produced by our screams to power their world? As a bonus question, what if the monsters discover that laughter is 100 times as powerful as screams? Ask those questions, and you get Monsters Inc.

One more for luck: artificial intelligence. What if a lonely, neglected and abused orphan discovers he’s the most powerful and important wizard in the world? Ask that question, and you get the Harry Potter series.

And a final one from my own experience as an author: pumpkins. What if someone accidentally planted a pumpkin patch over an old, abandoned graveyard, and each pumpkin became possessed by one of the spirits of the dead? Ask that question, and you get my latest novel, Pumpkins, book 1 in the Uncanny Icons series.

I could go on, but hopefully you see how it works. Until you hit upon a unique “What if?” question, a question that no one has asked before, you don’t have a story. But once you do hit upon such a question, an entirely new world opens up.

So, if you’re struggling with your story, either blocked because you think you need to have all the answers or growing bored because it doesn’t seem to be going anywhere, first of all, stop and give yourself a break. Then step back and ask yourself why you feel so compelled to write this story. What are you eager to discover? What characters, situations, or concepts are you excited to explore?

Finally, see if you can articulate the “What if?” question at the heart of your story. Once you think you have it figured it out, tell it to a few people and see what they think. Then write it down, post it somewhere where you’ll see it every day, and start searching for the answer!

Kevin Miller is an award-winning novelist and filmmaker. His debut novel, “Up the Creek,” has sold nearly 40,000 copies and has spent over 17 weeks at the top of Amazon.com’s Canadian Literature best-seller list and has topped several other best-seller lists on Amazon as well. Over the past 25 years, Kevin has applied his craft to a wide range of projects, including feature films, documentaries, novels, non-fiction books, and comic books. Kevin has been featured on CBC Radio, CNN, and numerous other radio and TV outlets, and his work has been written about and reviewed in dozens of publications, including the New York Times, Variety, the Globe and Mail, and the ​Vancouver Sun. Originally from Foam Lake, Saskatchewan, Kevin makes his home in Kimberley, BC, with his wife and four kids. In addition to writing, he also teaches extensively on creating writing and screenwriting, doing workshops at dozens of schools across Western Canada each year. He has also taught creative writing in the US, the UK, and Australia. When he isn’t doing those things, Kevin enjoys playing hockey, skateboarding, fishing, hiking, and otherwise exploring his world. Kevin has done a LOT of traveling in his 25-year career, but these days he cringes every time he has to get on a plane. You can learn more about Kevin at www.kevinmillerxi.com.

Thank you, Kevin! Readers, check out his exciting books, and his newest releases, Pumpkins and Snowbound! (book 5 in the Milligan Creek Series) 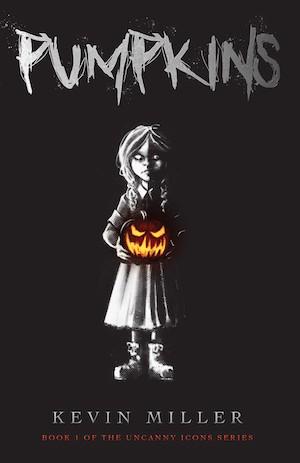